Just a note to let you know that work continues on the quest code for RealmSpeak. I've been working fairly closely with another Magic Realm gamer (Steve S) to iron out a lot of the details, and for testing the application. Once we feel this is ready for prime time, I'll make the new version available, along with a bunch of quests.

Also, as a reminder: if you are designing quests in the builder, keep in mind that there may be drastic changes in the next release that will render your quests nonfunctional. Once I have a stable release, I'll let you know.
Posted by DewKid at 1:41 PM 2 comments:

I've gotten some questions about the "Reward Group" concept in the quest builder. Let me explain that a bit.

When a character completes the requirements of a particular step in the quest, there's always a chance for the quest designer to supply "rewards". In many cases, the rewards are clear cut, but suppose you want to give the player a choice of rewards?

There are 26 rewards groups (A through Z). If you specify more than one of these reward groups, RealmSpeak will provide the player with a choice of options. If you play the DragonSlayer quest, you see this right at the beginning, when the player gets to choose starting equipment.

There's also another reward group marked only with a dash "---". This reward group is ALWAYS given, regardless of the player choice. Say for example you wanted the player to have a choice between a horse, weapon, or 10 gold, but you want the "Old Man" to join as a Minor Character regardless. You would make the "Old Man" reward as a dash "---", the horse as "A", the weapon as "B", and the gold as "C".

Of course, you can have more than one reward land in each group. If you want the player to have the choice between a Warhorse or a weapon plus 10 gold, you would set it like this:

Here's a new release (finally) with a few minor changes, and one big change. The big change, you may have guessed, is that this is the first to support any form of "questing", an idea I originally heard about from Jay Richardson's "Book of Quests" (find information about that here).

Now before anyone get's too excited, keep in mind this is more of a quest-beta than the final product. In other words, there's still a long ways to go. That said, there is actually ONE quest in this release based on the Book of Quests: Dragon Slayer.

When you start a new game of RealmSpeak, you'll notice a new "Victory Conditions" section:

To try out the quests, you'll want to select "Sudden Death", and "Book of Quests" like I did above. The other two questing options do NOTHING, so no need to even select them. Choose a character like normal, and then you'll see new gold button on your character pane:

Click that button, and you should get a quest chooser popping up, with the lone quest "Dragon Slayer" as your only option. Notice that you can click on the little shields to see how the quest all fits together. Click OK, and the game is on!

Notice now that there is a new quest tab:

This is where you'll periodically want to check back to see what it is you need to do. The gold shield with a Green check mark, is the setup step, and you've already done that. The two gold shields without a green check mark indicate the next possible steps in the quest. The gray shields are not achievable until you've completed those. Click on the shield, and there is a description about what that quest step requires. Once you have completed the requirement, the shield will automatically get a check mark, and gray shields will turn gold. Complete that last shield on the right, and you win the game. (I'll be honest, this is a bitchin' hard quest to complete)

Now if you've played the Book of Quests before, you'll immediately notice some shortcomings. Remember, this is supposed to be a beta!! I'll get to that stuff eventually, but this is what I have now. Also, there is only the ONE quest...

If you look in the download, you'll see a new batch file called "launchQuestBuilder.bat". This will actually launch the beta version of the Quest Builder for you to play with. WARNING: I will likely be changing things about the builder, and any quests you may assemble now will likely be broken later. Please don't put a lot of work into any quests with this tool! Once it is a bit more solid, I'll lock it down, and you can design to your hearts content!!

Ok, my wife is bugging me to wrap this up so we can go grab a bite to eat (is it really 8pm already?) Here's what's new:

Just for fun, thought I'd list some of the actions that can be applied for a given quest step, once the requirements have been met:


I should mention that there are actually more actions planned, than those listed above, but these are the ones I have going so far.  This list also covers everything I need to complete the Dragon Slayer quest.
Posted by DewKid at 1:48 PM No comments: 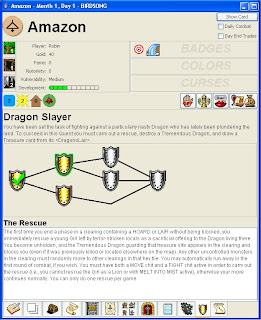 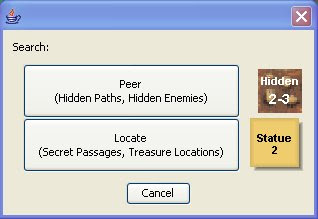