Blanks and No X

One thing I'm discovering, both for myself, and from e-mails I'm getting, is that the Expansion is a little too easy. I think a big part of this comes from the fact that there are no roaming monsters for the X tiles explicitly. That means more often than not, you are safe in the X tiles when there are no treasure sites. That's not good, and makes the game easier than I intended. That will change in the next release, as I assemble some monsters to cover that portion of the board.

Also, the balance of treasure at some of the sites is a little... off. The generator site has something like 12 treasures, and when you find that, its easy pickings to get a load of new stuff, and get very powerful very fast. I need to adjust that a bit.

There has been some confusion about the "BLANK" chits. I have had some people think this was an error in the program, but truly these are intentional. The 10 BLANK chits are meant to mix up the board a bit, to provide a level of danger to the normally safe Valley tiles. In most cases, the Valley tiles will end up with either a GOLD or a BLANK, but there is a small chance that the Gate of Chaos will appear which brings a lot of chits at once. If you want to calculate the odds, you can see the setup in the original expansion rules.

That said, Roberto U had a wonderful suggestion: make these BLANK chits into something meaningful, if no effect. One example he gave was "HAMLET". The chit would still have no overall effect, but would have more flavor than just "BLANK". Oooh, hey I just thought of something. If I made each of the BLANK chits actual "places", then there would be something to reference in the Guild Quests (coming soon) for various tasks. For example, imagine a quest that reads "Travel to the Cherry Hamlet, and pick up a package. Deliver the package to Druid Grove where ...." anyway, you get the idea. Since the Guild Quests feature will come with a quest generator tool that you can use to make your own quests, this will open the door for all kinds of variety.
Posted by DewKid at 9:42 AM No comments:


At long last, I have a new version of RealmSpeak that includes an unofficial expansion pack. The expansion provides new monsters, new treasures, new spells, new natives, new tiles (well, technically new), as well as a host of other things. Though most of this comes from the unofficial expansion my friend and I put together nearly 10 years ago, quite a few spells and even a couple of treasures were taken directly off the Magic Realm Wiki. In the cases where I knew the author name, I asked permission, and included their name as a credit down the left side of the card in light blue. Thanks guys!!

Although the expansion isn't completely finished (still some work to do on the special rules), you'll still find a lot of it in place. Take a look at the final list of spells (click to enlarge): 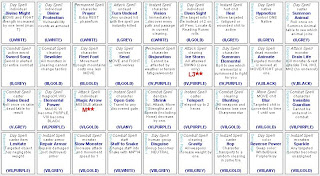 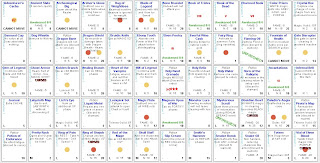 Of course, there are a lot of other new things:

To play with the new expansion, simply choose the game variant in the setup window: 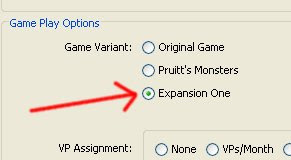 Alternatively, if you want to play regular Magic Realm, but want to try out the new spells, you can do that too:

When the game starts, be sure to take note of the new "Expansion" tab on the character window:

You'll also want to take a look at some of the new tables you'll be rolling on: 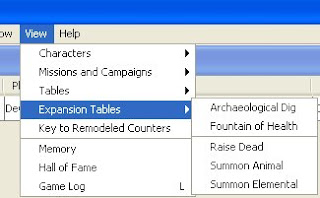 One new concept in the expansion I want to draw attention to, because it doesn't exist even in the print version I have online: Cursed Items.

These are items that once activated by a character cannot be deactivated! The only way to deactivate a cursed item, is to spend the night at the Chapel. Once this has happened, the cursed item is destroyed, and removed from your character. I think you can probably see why you would (or would not) want to activate these items.

I'll probably post more about the expansion later. Anyway, I'm tired, so let's just get to what's new in this release: