I meant to get this out last weekend, but there were some things I was working on that prevented that. In any event, here it is. The big thing in this release is a bug fix to Magic Sight, that was causing severe problems for the Witch King. It only happens when he tries to loot items in a clearing (like after cremating all the Rogues in the Inn), but since that's actually a fairly likely scenario, I thought I'd better get it fixed.

As promised, there are a couple new custom character abilities added to the character builder, straight from the advantages request page: Light Armor, and Extra Inventory. The first came from an original request to be able to construct custom armor for a character. This seemed a bit like overkill, since there really aren't that many options for armor. Instead, I went with an alternate suggestion, that there be an option for Light Armor. Now, in the character builder, you'll find that you can equip your custom character with one of the Light alternates: 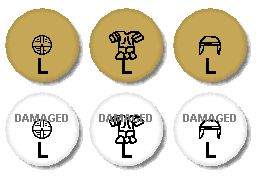 The first pictured above, is the buckler (Light Shield), then the leather cuirass (Light Breastplate), and finally the leather cap (Light Helmet). If you don't like my crude drawings (can you tell I'm NOT an artist?), I'd be happy to replace them with something better. I'd ask however, that you don't just steal something off of google images: custom drawings only please!

In my playtesting, I've found that this armor vanishes pretty quickly during any combat, but it can be a lifesaver. When the armor is destroyed, it goes to the same location as it's Medium counterpart: cap and buckler go to the House, and the cuirass goes to the Guard.

The other new custom character feature, is what I call "Extra Inventory". This allows you to select from many treasures (though not all) as a starting piece of inventory for a particular character. There's also a feature there to allow you to rename the treasure, to make it unique. Alternatively, you can select a horse, from any that are in the game (either for characters, or even natives!). Note that in either case, you are making a copy of that treasure or horse, so they are not lost from gameplay.

Oh, I added a new high quality version of the "Export HTML", so those of you that don't mind the bigger map size (4 MB instead of 1 MB!), can get a cleaner image.

BUGS/ISSUES:
This release is compatible with any 1.00+ version save game.
Posted by DewKid at 12:56 PM No comments:

Another maintenance release, with a couple of goodies. I fixed a problem with the curse dialog, which those of you that do a lot of "Read Runes" will appreciate. The behavior of dialogs and threads is interesting, to say the least, and quite fragile. I repaired a game lock related to table effects (Curse, Wish, PoP, etc) in 1.00 that sort of left it all a bit weird. I think this is the last of the weirdness fixed, and it all should be a bit more stable now.

I decided to attack a couple of the Character Advantage Requests listed on the Magic Realm Wiki. I plan to add one or two of these for every new release - we'll see how long THAT lasts! ;-) Anyway, one of the cool new advantages (by request) was to give a character special new actions. I implemented three: HEAL, REPAIR, and FORTIFY. Okay, that last one is my own invention, and it will likely get some raspberries from the most hard core Realmers, but there you are. The point is that these are likely to be major advantages (especially REPAIR), so its up to you designers to disadvantage them in some other way!

A character with a "special action" (as I call them) will have a new button appear at the end of all the buttons on the character window. For example, here is HEAL: 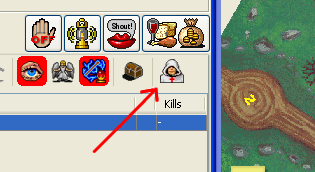 Otherwise, they work like any other action. HEAL and REPAIR are pretty obvious (see below), but FORTIFY is described like this:

Can FORTIFY during the day to gain armor-like protection in all directions (Suit of Armor) equal to their vulnerability. The FORTIFY action requires a successful roll on the HIDE table (though not affected by HIDE advantages!). This fortification can be damaged and destroyed as if it were armor. Regardless of its condition at the end of the battle, the fortification is lost at MIDNIGHT.

Maybe that's TOO powerful, I just don't know yet. I thought about limiting it to M armor, but I'm sure those of you that care will let me know! ;-)

BUGS/ISSUES:
This release is compatible with any 1.00+ version save game.
Posted by DewKid at 11:19 AM 5 comments:

Sorry about releasing an update less than 12 hours after the last. I just finished playing an online game with some friends, and we ran into a couple of painful bugs affecting a couple of BLACK magic spells. The first had to do with the Absorb Essence spell being cast under the optional Enhanced Magic rules - the game would crash, and leave the autosave in such a state, as to be unable to continue!! We had to completely restart the game from the beginning. Ouch. Fortunately, turning off enhanced magic was the immediate remedy, but I still wanted it fixed.

The second had to do with Power of the Pit crashing every time the "Rust" result was rolled. Of course, this comes up on a roll of SIX, which is pretty common, so it happens a LOT. Turns out it was just something stupid I did in the code for 1.01, so it was pretty easy to fix. Since Power of the Pit is somewhat unavoidable in a game of Magic Realm, I figured this better be fixed quickly.

----
Update #1 - Thanks to John S. Myth (an alias I'm sure), there are now Linux scripts included in the 1.01 release download. If you've already downloaded, and you don't see them, then you probably got it before I added them. Download again, and you'll be fine. :)
----
As promised, I'm doing a quick turnaround on the last release, to resolve the worst bugs. I'm actually fairly pleased at how few new bugs were discovered, especially considering how many things changed in 1.00!

The only real "new" feature in this release, is the addition of updated Mac applescripts to support the new classpath I required in 1.00, thanks to Jorge Arroyo! If someone wants to do the same thing on the Linux front (or any other operating system you guys are running this on), I will be able to provide them in future releases, and make RealmSpeak more easily accessible to those less "geek" than others.

BUGS/ISSUES:
This release is compatible with any 1.00+ version save game.
Posted by DewKid at 3:06 PM No comments: