Note: this release is compatible with previous releases going back to 1.0.8.0, so if you are GMing a tournament right now, and are using 1.0.8.0 or later, you are safe to upgrade.

This is exciting. My brother-in-law arranged to have some drawings done for the expansion, and I just got these a week ago. Basically, these are replacements for my own artwork (which was pretty pathetic), and boy are they great! The artist's name is Vrin Thomas, and you can see some of his work on his facebook page. If you like his work, I recommend hiring him! Here's a few of the images he sent:


That's the Lich, the Carnoplant, a Dragonman, and a carrion crawler. Pretty sweet! I added these to this RealmSpeak release, along with all the others, in both a black & white format, as well as color. I hope Vrin likes the colors I used... 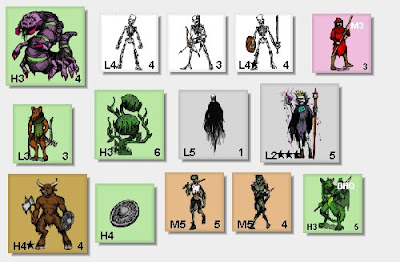 It was actually a shame to shrink them, but its a necessary step to getting them on the chits!

Oh, something rather cool in this release: under the View menu, you'll see a couple of entries for tracking Die Rolls. That's right, every single die roll in the game is now tallied, and you can see the statistics for each kind of roll. Why? I've gotten a lot of complaints about the "random number generator", with people saying that it's a little "6" heavy. Well, now you can do your own statistics, and see if that's true. Have a rough game? Check the statistics, and see how it all laid out.

Posted by DewKid at 5:41 PM No comments:

Just a few more bug fixes to keep the tourney rolling, and fix to the multi-board code. This release is compatible with any 1.0.9.0 or newer game.

Posted by DewKid at 1:13 PM No comments:

Why don't you put down your swords and spellbooks for a moment, and take a chance to go back to Vietnam, get stoned, and jump randomly through time with nothing more than your Radio, a few weapons, and your trusty M16.

What the heck am I talking about? Why a new TimeTripper release, of course! This is an old SPI game that I converted to Java several years ago, and has sat stagnant for far too long. I abandoned it because I was still pretty heavily getting RealmSpeak up and running, and because I had too many Grognards (you know who you are) nit-picking the thing to pieces. I mean, that's cool and all, I just got tired of it.

This new release has plenty to offer: lots of updated maps, support for saving and loading games, and of course, plenty of bug fixes. Why, the bug tracker is completely empty at this point for the game, so I'm looking for a "few good men" to start playtesting this again. Heck, I'll even listen to the Grognards!

Posted by DewKid at 8:50 PM No comments: