I've been working pretty heavily on the new expansion for Magic Realm/RealmSpeak, and thought I'd give you an update. There are 60 new treasures planned, and 43 new spells. Most of the treasures are done, so I'll be moving to the spells soon. If you are familiar with the expansion my friend and I released a while back, then you'll recognize a lot of it, but there are definitely a bunch of changes too! For one thing, there were a few treasures that were a little out of character for the Realm, and needed some tweaking. If you are curious what is coming, this is the current list (click the image below for full-size): 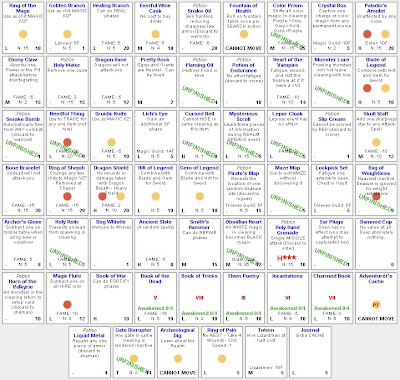 Of course, there's bound to be changes, especially those that are marked in green as UNFINISHED. I'll post the list of spells at a later date.
Posted by DewKid at 9:35 AM No comments: